Here’s something you can check off your worry list: according to a report from NBC Sports’ Pro Football Talk, the NFL has now inspected and approved the new natural grass playing field at Estadio Azteca in Mexico City, where the Kansas City Chiefs will face the Los Angeles Chargers on Monday, November 18 in an NFL International Series game.

This is the second consecutive year the Chiefs have been scheduled to play such a game at Estadio Azteca. But last season, the Monday Night Football game between the Chiefs and the Los Angeles Rams that was scheduled to be played there was moved to the Los Angeles Coliseum just days before the contest, after it was discovered the playing surface was in unusable condition after a busy schedule of soccer games and other events.

Under normal circumstances, this might not have presented much of a problem. Natural grass fields can be resodded by modern grounds crews in just a day or two — and the NFL certainly would have been willing to repair the field once they were aware of its condition — but Estadio Azteca’s field was a new kind of natural-synthetic hybrid that could not be repaired quickly.

Now, however, the stadium’s field has been replaced with natural grass — and the NFL has inspected and approved it. Even if the field should be damaged by events taking place between now and November, steps could be taken to get the field into a safe, usable condition — even on short notice.

After last season’s debacle, the NFL — and the two teams involved — will undoubtedly be continuing to keep a close eye on the field’s condition. 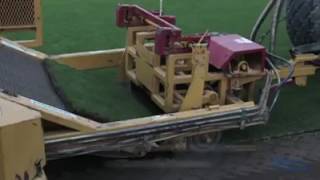